Honso Kampo® Granules manufactured by Honso Pharmaceutical Co., Ltd. in Nagoya, Japan are easy-to-use, standardized, and highly effective formulas. Each lot is routinely tested for key herbal constituents, heavy metals, purity and microbial content under requirements of the Ministry. The finished herbal formula is then scrutinized further to measure at least two active constituents quantitatively by HPLC to ensure consistency. 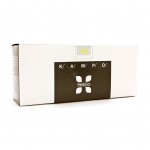 Japanese herbal medicine, known as Kampo, is part of the East Asian Chinese medicine tradition. The word “Kampo” means “Han method,” a reference to Chinese culture of the Han era (206BC – 220AD). Kampo is fundamentally a clinical system based on the classical medical literature dating back to the Han era. Kampo is an older tradition preserved in Japan and based upon Chinese Medicine. In Japan, Kampo has been in almost continuous use for centuries as a system of medicine with the exception of the Meiji era (1866 – 1912) when traditional medicine was banned. It was during the Meiji era, however, when pharmacological research was first used to validate the use of the herb MAO (L. Ephedra sinica). In 1885 Dr. Nagayoshi Nagai isolated the alkaloid ephedrine from this herb, frequently used in formulas for bronchial asthma and arthritis. The pharmacological action of ephedrine was explained by Dr. Kinnosuke Miura in a German medical journal and ephedrine subsequently became a mainstream pharmaceutical for the treatment of bronchial asthma in Europe and North America as well.

Kampo was validated as a clinical system in the 20th century. By the late 1960s, in large part due to public demand, Kampo was integrated into the medical mainstream. Today the large majority of physicians use at least some of the traditional formulas, which are available in almost all pharmacies by prescription, or under the advice of specially trained pharmacists. The Japanese national health insurance plan covers the use of many of the traditional formulas.

Hundreds of papers were published on the pharmacology of the herbs of the traditional pharmacopoeia even before the turn of the 20th century, but in recent decades clinical and animal research has been undertaken on a large scale by university hospitals and private clinics throughout Japan. Research in Japan has been more rigorous by western standards in the mold of conventional pharmaceutical research. Japanese research on botanical medicine also uses substances that are pharmaceutical grade according to western standards.

In 1967, the first four Kampo formulas were approved for coverage under the national health insurance system. As of today, this number has increased to 148 prescriptions approved by the Japanese Ministry of Health, Labour and Welfare (the same central government body as the US FDA that regulates pharmaceutical manufacturers). In 2001, the Ministry of Education, Science, and Technology also set new guidelines that called for the incorporation of Kampo medicine into the core curriculum of Japanese medical schools, and as of 2005, all medical schools in Japan have made the necessary changes to their curricula. Every approved formula produced by different manufacturers is composed of exactly the same ingredients under the Ministry’s standardization methodology.

Today, Kampo is seen as a well-integrated component of Japanese medical system. A 2012 study by Moschik et al published on Evidence-Based Complementary and Alternative Medicine focus on the status of alternative medicine in Japan have shown that 83.5% of Japanese physicians use Kampo medicine in practice.